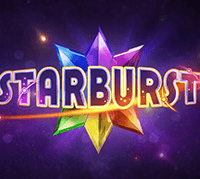 Starburst is the most popular online slots game on the Internet today. There are five reels and 10 paylines as well as a few cool features. Blast off into outer space playing Starburst online with the simplicity and cool features that makes the game beloved by so many players around the globe.

148 Stemmer
Thank you for your rating.
You have already rated.
Something went wrong, please try again later.

Starburst is the most popular online slots game on the Internet today. There are five reels and 10 paylines as well as a few cool features. Blast off into outer space playing Starburst online with the simplicity and cool features that makes the game beloved by so many players around the globe.

It’s a win both ways title game and can be played in a wide variety of stakes and the maximum you can win on one spin is 500x your original stake. The game has an RTP of 96.09% and it is one with a variance that is low to medium. As such, there are winning spins often but most of the time they are of the smaller variety. To this point, the hit frequency when playing Starburst online is 22.65%

There is only one Starburst bonus chance. The game does not have a typical feature when it comes to free spins but within the game, the wild symbol, which is the Starburst, can expand. That will give you wild reels and after re-spins that can eventually get you three wild reels for bigger payouts. The feature is called the Starburst Wilds and considering that there is a re-spin involved, we will go into more detail in the free spins section just below.

As stated above Starburst online does not have a typical free spin feature but the wild symbol in the game is key. The wilds can expand and take the place of every other symbol but will only show up on the second, third, and fourth reel. When one of the Starburst wild symbols is seen on one of the three, aforementioned, reels the Starburst Wilds feature is triggered. Then the wild will expand over the whole reel, which is now a wild reel. The wild reel is locked in place and you are awarded one re-spin.

When you make your re-spin and you see another Starburst symbol appear you get an additional wild reel as well as another re-spin. The three middle reels can be filled with the expanding Starburst symbol, so you can get up to three re-spins. The Starburst Wilds feature will come to an end when no additional Starburst symbols show up when doing a re-spin. If there are three reels that are wild, it increases your chance to fill them with the highest value symbol in the game of the Bar. If you fill all three wild reels with that symbol you net the biggest payout of 500x your original stake.

Playing Starburst online allows you to use the Autoplay feature where you can pick from 10, 25, 50, 100, 250, 500, 750, or 1,000 automatic spins with one stake. You can stop the spins whenever you like and change the stakes or simply stop playing. There is also the Advanced setting in Starburst where you can choose to stop the Autoplay feature if there is any winning spin or if a win goes above a specific amount.

You can also play Starburst for free at many online casinos with the demo mode or free mode. This is advantageous for beginning players, those that want to try out new betting strategies, and those that just want to play Starburst online for fun. In the Quick Spin setting, you can adjust the speed of the spinning reels.

When you play Starburst online there is no doubling option.

The graphics, animations, and sound in this space-age game are fantastic. Starburst is a very visually appealing game with all of the colors of the gem symbols. On top of that, the arcade game lighting effects only add to the excitement to the game. The game was launched in 2012 and has not changed, which is why the animations are not the best but they are still solid. The sounds will also take you out of this world and you can turn them off whenever you want.

There are five different colorful gem symbols playing Starburst online, as well as the Starburst symbol, Bar symbol, and 7 sphere symbol. The theme of the game is outer space and it is very much like a video game from the 1980s. The colorful gem symbols on the dark background make the game pop making the space-themed game visually appealing as well as fun and easy to play.

Below are all the symbols and the payouts for hitting 3,4, or 5 of them on a reel:

You need to be aware that Starburst is a slot where you can win both ways. So, wins are created from left to right as well as right to left.

Even though Starburst was released way back in 2012 it is still has a great design, which means it is solid for mobile play. It can be played on iOS, Android, and Windows devices. One of the main reasons the game is so popular with mobile players is its simple 5×3 layout, which lends itself to working on all types of devices no matter how small the screen is.

You can play Starburst online in the mobile version through a casino app or directly through your mobile browser.

Who Is Behind Starburst?

NetEnt is one of the leading providers for online games and most of the games they power are for slots titles. They are the developer of Starburst and the company has won many awards for the many fantastic games they have developed and with good reason. One of the things you can be sure of when playing Starburst, or any other NetEnt game, is that they are 100% provably fair since they are licensed by all of the leading regulatory jurisdictions.